Is It Hot Enough For You?

While Fall fast approaches up north, here in Florida it's still as hot as blazes.  To help remedy that situation, I thought I'd focus this week's blog on recipes designed to keep you cool when it's hot outside.  Below are five of my favorite summertime treats.

Instant Ice Cream - As the name implies, it's possible to whip up a batch of homemade ice cream in seconds flat if you know how.  The secret is to use frozen bananas as the prime ingredient in this dish.  You know those too ripe to eat bananas that you usually toss away?  Next time, peel and slice the banana into eight chunks.  Next, place the chunks in a container before placing it in the freezer for at least four hours.  When you're ready to make ice cream, pull the frozen banana out of the freezer and toss the chunks into a food processor.  Chop the fruit up until the mix resembles crumb cake.  Then add fresh fruit like strawberries, raspberries, blueberries or pineapple chunks.  Turn the processor back on and in less than a minute the mixture will turn into smooth, creamy soft serve ice cream.  (If you want chocolate, substitute two tablespoons of chocolate syrup and a splash of vanilla for the fruit.)  See the video below.

Ice Cream Cake - Here's a way to turn a couple scoops of ice cream into an entire cake.  How cool is that?  Put two cups of ice cream into a bowl and allow it to soften.  Into that add one cup of flour, one tablespoon of baking powder, 2 eggs, 1/4 cup oil and 1/4 cup of chocolate chips.  Mix into a batter which you will pour into a prepared cake pan.  Bake at 350-degrees for 35-40 minutes until a toothpick inserted into the cake comes out clean.  Let cool before topping with sprinkles, shredded coconut or powdered sugar. Needless to say, this cake also tastes delicious when served warn and topped with a scoop of your favorite ice cream.
Crema di Limoncello - This adult beverage starts by peeling a half dozen lemons.  Don't toss away the peels, because you're going to steep them in grain alcohol for a week.  Once the peels are white and the alcohol turns yellow, you'll strain out the peels and toss them.  Set the alcohol aside.  Put a pot on the stove and pour 4-cups of cream and 3-cups of sugar together.  Heat slowly over a medium heat until the mixture just starts to boil.  Then take the pot off the hot burner and allow it to cool completely before adding one tablespoon of vanilla to it.  Last but not least, combine the vanilla cream with the grain alcohol.  This will give you enough to fill two wine bottles which you'll place in the freezer.  Don't worry about the bottles breaking, because the alcohol will keep the Crema di Limoncello from freezing.  Serve straight up or with a splash of cream.  Delicioso! 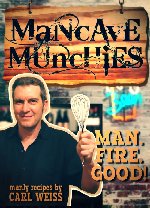 Want all my recipes?  I just released the Man Cave Munchies Cookbook.  In it you'll find more than 100 manly recipes that you will find easy to make.  That's because most of them come complete with hyperlinks and QR codes that lead you to my step-by-step cooking videos.  Use the book to wow your friends or give it away as a gift to your favorite man cave man.  Available in digital and print format.

Lemon Ice Box Pie - If you're wondering what to do with the juice from the half cozen lemons you peeled, this yummy pie is the answer.  You'll need a prepared pie crust (which I'll show you how to do on the video), 2 eggs, 3 tablespoons softened butter, a 1/4 cup flour, 1-cup sugar, 1-cup milk and ta 1/4 cup of lemon juice.  Start by separating the eggs.  Whip the whites until they form soft peaks, then set them aside.  Put the egg yolks into a bowl  Add to the bowl the sugar and the butter.  Stir until blended.  Add the milk, the lemon juice and flour to the mixture and whisk until smooth. Then fold the egg whites into the mix before pouring into a pie crust that has been blind baked for 7-minutes.  Bake the pie at 425-degrees for 10-minutes before reducing the temperature to 325.  Allow the pie to bake for another 30-40 minutes until the lemon pudding is set.  Let the pie cool before storing it in the fridge.  Top with whipped cream and serve.

Coconut Cream Pie - As with the lemon pie recipe, we'll need a prepared crust.  The difference is, this crust you'll allow to bake for 15-minutes at 350-degrees until it is finished cooking.  Set the crust aside.  Then you'll make the coconut cream by toasting a cup of coconut flakes at 400-degrees for 5-minutes. Set this aside before putting the following in a blender: 3 cups milk, 1 cup sugar, 1/4 cup flour and 3 eggs.  Blend until the eggs and the flour have been absorbed and there are no lumps.  Pour this into a pot then light a medium flame.  Stir constantly until the mixture just begins to bubble and the mixture thickens.  Remove from the heat and stir 1 tablespoon of vanilla and the toasted coconut into the pudding and stir well.  Pour the pudding into the pie crust and allow to cool before transferring to the fridge.  Top with whipped cream and serve.