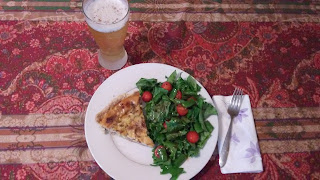 Which Came First, the Quiche or the Egg?

While most people automatically believe that quiche was invented in France, the dish actually originated in medieval Germany.  The word 'Quiche' is a bastardization of the German word 'Kuchen' which translates as Cake.  When the French later got into the act, they renamed their version of the egg cake Lorraine.  Any of you who have ever had a slice of Quiche Lorraine recognize the classic egg and bacon recipe that helped put quiche on the map.

When you get right down to it, quiche is simply an open-topped egg pie.  The secret to making this dish a standout is to come up with interesting, some could even say manly, ways to fill it.   While I will share with you a few of my favorites below, I want to also point out that if you wish to make great quiche, you need to start with a great crust, since that is the foundation of egg pie.  This means you need to learn how to make crust from scratch, since a store bought crust simply won't do.

The only 2 reasons I keep a can of Crisco in the fridge is to make pie crust and biscuits.  (It will last a long, long time if kept chilled.)  To start your crust you will need a big bowl into which you will pour 1 1/2 cups of flour and a 1/2 teaspoon of salt.  After stirring the mixture, add a 12/2 cup of vegetable shortening and using a fork, cut it into the flour until it resembles a crumb cake.  Into this add 4 teaspoons of ice-cold water.  Continue stirring until the mixture begins to clump together.  You may need to add additional water, but do so gradually.  You want to wind up with pie crust, not Spackle.

Put the fork down and use your hands to form a ball.  Once this occurs, take a sheet of wax paper approximately 2-feet long and lay it atop a cutting board.  put the ball of dough about 4-inches from  the edge of the wax paper and fold the paper in half.  Press the ball flat with your hand.  Now comes the fun part.  Using a rolling pin (or an empty wine bottle), roll the crust between the sheet of wax paper until it is thin, round and starting to squirt out the sides of the paper.  Carefully peel half the wax paper off the crust and transfer it to a pie pan.  Remove the rest of the wax paper and use your fingers to press the crust onto the pan.  Next, prick the crust all over with your fork and fire up the oven to 400 degrees.  Blind bake the crust for 7 minutes before removing from the oven.  Last but not least, turn the oven down to 350 degrees.  (If you forget this step you will wind up with a large hockey puck, since your quiche will burn to a crisp at 400 degrees.)

Now all you have to decide is what you wish to fill your crust with.  The base of all quiche recipes is custard, which is a mixture of eggs and cream, beaten to within an inch of their lives.  I typically start with 6 eggs, 4 whole and 2 yolks, into which I add a cup of half and half (or almond milk).  The reason I don't use 6 whole eggs is to make the custard lighter.  Using 4 eggs and 2 yolks makes the filling less rubbery.  Remember, you want custard, not scrambled eggs. Depending on the filling du jour, I will add salt, pepper (or cayenne), and possibly a dash of nutmeg or pinch of herbs.  You will see what I mean when you check out the following recipes.  Us a whisk to beat the mixture for no less than 2-minutes.  Then set it aside while you martial your filling.

This Man Cave spin on the classic Quiche Lorraine not only taste's great, it will help assuage any lingering macho angst you may still harbor. 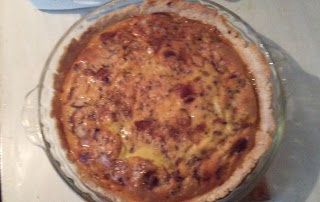 Start by sauteing the bacon and onion for a minute.  Then add the green pepper and thyme.  Cook until the onion and bacon browns slightly. (approx. 5-minutes)

Scoop this mixture into your prepared pie crust and top with the egg mixture.  Bake at 350 degrees for 45-minutes.  Serves 6.

Similar to Cowboy Quiche, this recipe substitutes sausage and hash brown potatoes for the bacon.

Start by browning the hash browns, sausage, onions and green peppers.  Transfer them to the pie shell and pour the egg mixture on top.  Bake at 350 degrees for 45-minutes.

Start off by making a kind of chili by browning the meat and onions.  Then add the green olives, salt, pepper, chili powder, cumin and cilantro.  Saute for 1-minute before adding the diced tomatoes. Cook for 5-minutes, then transfer about 1/2 of the mixture to the pie crust.  (Save the remainder to serve on the side.)  Pour the egg/cream mixture atop the chili and bake for 45-minutes at 350 degrees.  Serve each slice of quiche with a dollop of sour cream.  Ole!

If you like pepperoni pizza you will love this quiche.

What I love about this quiche is you don't need to precook the ingredients.  Just stir together the black olives, olive oil, oregano and basil in a small bowl.  Spoon the mixture at the base of the pie crust and top with the shredded cheese and 2/3 of the pepperoni.  Then pour on the egg mixture.  Float the sliced tomato and remaining pepperoni on top of the egg mixture.  Bake for 45-minutes at 350 degrees.  Delicioso!

If you are into blue cheese or Stilton, this quiche will knock your socks off.

Use a blender into which you will pour a cup of half and half.  Fire it up on high speed and drop 1-inch chunks of both the cream cheese and the blue cheese are broken up a bit (but not liquefied). Add a pinch of salt and pepper, then add a dash of thyme, tarragon and chives.  Pour into the pie shell and bake for 45-minutes at 350 degrees.

Once you get the hang of making quiche, there are literally hundreds of different recipes from which to choose.  While many of them are vegetarian in nature, as you can see from the examples above, there are also meat-lovers varieties that will sate the caveman in all of us.  It will also go a long way to proving the fact that real men bake quiche.

Find more man cave recipes, social links and videos at Man Cave Munchies
If you'd like to share your favorite quiche recipes with Carl, email him at mancavemunchies@gmail.com