How to Build a Better Burger

It shocks me to see someone order a hamburger in a restaurant.  That's because most restaurants
charge anywhere from $9.99-$14.99 for one these days.  What's even worse is that most of those fifteen dollar burgers aren't anything to write home about.  So too are prepackaged grocery store burgers and fast food burgers that look as though they've been run over by a steam roller.   The bottom line is that one of the cornerstones of North American cuisine has gotten to the point where hardly anybody knows how to make a mouth-watering, stick-to-your-ribs All-American hamburger anymore.

With that in mind, I thought I'd take a man cave moment to give you my take on the lowly burger.  What should be one of the simplest man cave meals to prepare has turned into one of the hardest.  That's because most folks don't know that the more you poke, prod and pamper, the worse the burger tastes.  All a hamburger needs to have in it are three things:  meat, meat and more meat.  Unlike a meatloaf, you don't need or want to add onions, breadcrumbs, Worcestershire sauce or eggs to a burger.  If you want onions, they're better served grilled atop the burger, since they won't have time enough to cook inside the patty.

The patty is another thing you man cave men need to get right.  You don't want it too big or it won't cook properly.  You don't want it to small or the bun will dwarf the burger.  You also don't want to knead or crush the meat too much.  All you need to do to form a picture perfect patty is to take a fistful of burger and form a 3-inch wide meatball, then press it between your palms to form a fat, flat round disk.  Plate the burger and use your finger or thumb to create a dimple in the middle.  This will keep the patty from bulging when you cook it.

Speaking of cooking your burger, never place it on a cold pan or grill.  If the burger isn't sizzling, you need to remove it from the heat and wait another minute.  The secret to keeping a burger juicy is to sear the outside to keep the juices in.  And resist the urge to press the patty down more than once with your spatula or you'll squeeze the juice out of it.  Below is a video that shows you how to prepare, cook and plate a better burger.


That doesn't mean you can't go crazy when it comes to the toppings you can place atop a burger.  Far from it.  Below are several of my favorites:

Better Bacon Burger - While bacon-topped burgers are hard to beat for smoky flavor, try sauteing your bacon with your onions, before adding a splash of wine or beer at the end to sweeten them both.  Then top your cheeseburger with these and tell me this wasn't the best bacon burger you ever had.

MMMM Burger - Mushrooms, Merlot & Melted Mozzarella.  Once you've got your burger going, chop some onions and mushrooms, which you can cook alongside the burger in the same pan.  Once you flip and sear the back of the burger, top it with mozzarella and put the patty on the bun.  Then give the pan a shot of Merlot to both sweeten the onions & shrooms while simultaneously de-glazing the pan.  Once the wine cooks off, top your burger with the wine-infused onions and shrooms. Mmmm!

Italiano Burger - Otherwise known as a pizza burger, this creation tops the burger with melted mozzarella, grilled prosciutto (Italian bacon) and a tablespoon or two of warm marinara sauce.  (It sure beats ketchup.)

The French Connection - No, this dish doesn't add snails to the burger.  What it does is top the burger with ratatouille, which tastes better than it sounds.   The secret is to saute onions, green peppers, mushrooms and a zucchini in a little olive oil before sprinkling a bit of salt, pepper and thyme.  Cook the veggies until just about done, then give the pan a shot of red wine or beer (sacrebleu!). Once the liquid has evaporated, you're left with a great side for steak, as well as the perfect topping for a burger.  Feel free to add a slice of Camembert cheese if you prefer, mon ami.  (Look for Steak au Poivre and Ratatouille in Season 7.)

Southern Fried Burger - To give it a southern twang, you need to saute some fried green tomatoes to top these burgers with, as well as making a sweet and sour sauce to pickle the onion.  Grill the burgers on one side before adding the slices of pickled onion to the pan.  When the burgers and the onions are finished grilling, put the burger on a toasted bun, before topping with onions, pickle slices and fried green tomatoes.  (pickle sauce recipe = 1/4 cup vinegar, 1/8 cup water, 1/8 cup sugar and a 1/2 tsp salt) 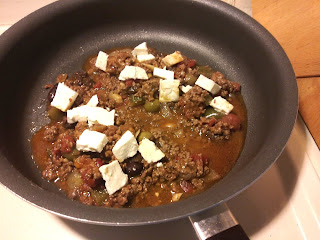 Greekadillo - As you discovered in earlier blogs, food is like a palette from which a chef creates a multitude of exotic dishes.  Sometimes this means crossing ethnic lines, as I did in this burger-based concoction which starts off as Spanish Picadillo, topped with Greek cheese and served in a toasted hoagie roll.  Since I used Greek Calamata olives in the picadillo, I thought, "Why not make a tangy hot sandwich with the leftovers.  Stay tuned to the Man Cave Munchies YouTube channel for the Spanish Sloppy Joe episode which will show you step-by-step how to make this tangy Spanish treat.


That's all for this week.  Don't forget to follow me so you won't miss any of my new recipes.
Posted by Carl Weiss at 10:55 AM