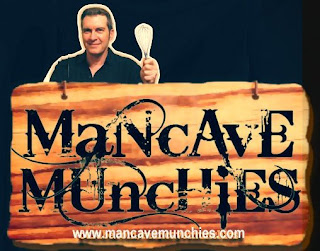 One of the reasons I started Man Cave Munchies back in 2012 was due to the fact that most of my
buddies didn't know how to cook.  This meant they routinely trooped over to my house for meals.  What was even funnier was that most of them loved to regale me with what Emeril or Alton Brown had whipped up on TV that week.  My response to this was usually, "Believe it or not, cooking isn't supposed to be a spectator sport.  Instead of getting mad, I decided to get even by creating a video channel dedicated to showing my buddies how to make delicious meals step-be-step.  To make the videos even more appealing, I instituted two rules:
To date, I have stuck to these principles to create close to eighty mouth-watering dishes that include everything from burgers and barbecue to comfort food and Cajun cuisine.  In short, I created a cooking class for man cave men that's sure to please every palate.  While I'm not sure how many of my buddies rely on Man Cave Munchies for recipes, more than 200,000 views tell me someone is using this handy resource.  Below are a few fan favorites:

Beer Cheese Soup - Why pay $7.00 a bowl for the stuff in a restaurant when you can whip up an entire pot of it for the same price? Here’s a quick and easy way to turn a bottle of beer into a man cave meal in 10-minutes flat because there are only 8 ingredients needed:

1 bottle of beer
4 cups chicken broth
4 cups shredded cheese
1 diced onion
1/2 cup flour
1/2 stick of butter
1 tsp dry mustard
Dash of Worcestershire
Swineapple - What's not to like about a pork-packed pineapple grilled over a charcoal fire?  This recipe is even simpler than Beer Cheese Soup since it only requires 3 ingredients: 1 pineapple, pulled pork, and barbecue, or in my case Beer BQ sauce.  Take a whole pineapple and slice off the outer skin. Then cut the top and bottom off before coring it.  (The video below shows you how to do this step-by-step.)  Stuff the pineapple with pork and plug the ends to keep the meat from pouring out.  Place the pork-packed pineapple on the grill for an hour, turning it every 15-minutes.  Slather with BBQ sauce during the final 15-minutes.  Put the swineapple on a platter, remove the plugs and slice into 1/2 inch thick rounds.  Delicious!

Beer Brownies - What's dinner without dessert?  Especially when the dessert is made with beer.  This recipe produces enough brownies to feed the whole gang when they show up to watch the big game.  Aside from the video below, here's what you'll need: 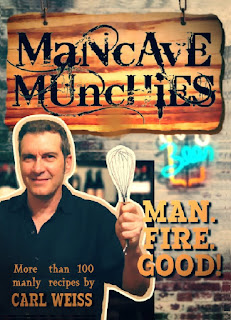 Making fabulous meals isn't all that difficult to do if you can follow simple instructions.  As my buddies found out, when it comes to cooking, it isn't what you know, it's WHO you know.  Munch on!

Like m recipes? Now you can buy my cookbook!

Want even more recipes?  Check out my Man Cave Cookbook on Amazon.  It's packed with more than 100 mouth-watering recipes, including every single Man Cave Meal that I prepared on my YouTube channel during the past 8-years.  Better still, that the cookbook contains hyperlinks and QR codes that take you straight to the video to make preparing man cave meals even easier.

Available in either digital format or paperback, this is the cookbook all you manly men have been waiting for.
Posted by Munch On at 12:59 PM